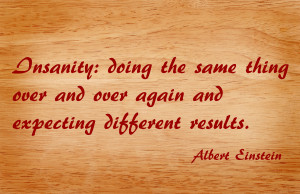 I was in a client’s office this week and there was a quote by Einstein on the room wall.  It said:

‘Insanity: doing the same thing over and over again and expecting different results.’

It reminded me of the day when I realised that I’d been doing the same thing with regards to the relationships I’d been in and getting the same outcome.

That outcome was always the sudden end of the relationship, feeling frustrated, confused and clueless as to what had gone wrong …….and being alone.

On the surface the guys all seemed very different.

I had never had a ‘type’ physically so they all certainly looked different, some were older, bald, had a great mop of hair, blond, dark, slim, carrying a few extra pounds.

Some were outgoing, some more reserved, some loved sports, and others didn’t.

The start of the relationships were different too, some were full-on from the start with great sexual chemistry, some were slow burners where I really wasn’t sure to begin with and some were steady.

Some of the men were great talkers and asked lots of questions, some were more reserved and more tentative to find out about me.

The outcome was always the same though, the relationship fizzled out, sometimes after a few dates, sometime after a few months.

There were no rows and no big talks, the men just suddenly disappeared, or that’s what it felt like.

I know now that what I was doing was attracting the same type of men, even though on the surface they seemed very different from each other.

And what I was attracting were men that, when the going got tough or when intimacy was knocking on the door, would withdraw, men who were closed – but that’s a whole other story.

And so, I realised that although the men were all very different and the relationships on the surface were all different, the ending was always the same AND I was the constant.

I knew that not all men behaved that way.

I knew from my friends and from what I read that there were men who wouldn’t withdraw and were open and weren’t afraid of intimacy.

The question was then ‘How come I’m attracting these type of men’ and I realised it must be something that I’m doing or not doing.

I was spot on, and it was at that point that I realised I had to stop doing the same thing over and over and learn a new way.

I had to do something different to get a different result.

I love what I do.   I believe in every one of my clients and their ability to achieve whatever they desire.