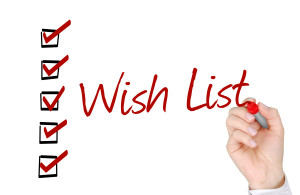 Ever felt that excitement when you meet a man and he’s everything you want?

He’s gorgeous to look at, he’s funny, he’s interesting, he’s confident and he seems to get on with everyone.

He likes doing the same things as you, he loves the same music and he enjoys going to the same places.

And then after a few dates, or even after a few months, you notice he’s not as attentive as he was in the beginning, he’s not phoning you as often and he’s not inviting you to join him at events you would enjoy going to.

How did you feel?  Confused, angry and disappointed?

I know I did and I’ve experienced this over and over again.

I can remember reading somewhere how important it was to be clear about the type of guy I wanted, that I needed to have a clear picture of him so I’d know him when I saw him.

I wanted a man who was tall, had dark hair, looked smart, enjoyed the theatre, had lots of friends and who I felt physically attracted to.

And when I met a man that ticked all, if not most of the things on my list, I felt thrilled.

I felt even more thrilled when he was interested in me too.

He was everything I was looking for and so I’d throw myself into the relationship, and why not?

There was no reason I could see why it wasn’t going to work, after all he fitted the picture I had of my perfect man.

Only each time, despite him being ‘perfect’ for me, meeting all my criteria and despite the amazing chemistry I felt, it just didn’t work out.

It seemed that, after a few dates, or a few months, he started to become distant, he stopped ringing every day, he was distracted when we were together and he didn’t invite me to join him to see the latest theatre production.

And boy, did I feel devastated each and every time.

I was left feeling miserable, confused and angry.

And what was worse, the more distant he became the more I wanted him to ring me, to be attentive, to feel he wanted me with him at the events we both enjoyed, because that was how I felt about him.

And the more he didn’t do or want those things, the more I wanted him.

It was as if the attraction, the chemistry, I felt for him got stronger.

I couldn’t understand it.

Each of the guys fit the criteria on my list.

And then I realised something.

Each time things got bad, what made me feel miserable was that he wasn’t ringing me, wasn’t being attentive, that he didn’t want me to join me at the events we both enjoyed.

And then I wondered about that ‘list’ I’d made, the list of things I looked for in a man.

What if the list of things I was looking for were the wrong things to look out for?

What if the ‘list’ I was looking for included feeling special and adored, having a man ring me every day, being with a man that wanted me with him all the time, a man that planned events for us to go to that he knew I would love.

And that’s what I did.

And you know what happened?

I became attracted to men that made me feel special, that rang me every day and that planned amazing dates that I loved.

And, best of all, I was no longer attracted to men who didn’t make me feel like that.

I still noticed the men that were tall, that had dark hair and talked about their love of the theatre but I didn’t feel attraction, that chemistry, unless the things on my new ‘list’ were there too.

So, have a think about what’s on your ‘list’.

Is your list all about what a man looks like, what he does for a living, what he likes to do and what others think of him?

Or is your list all about how you want to feel around a man, about what a man does for you and how he treats you?

I love what I do.   I believe in every one of my clients and their ability to achieve whatever they desire.